DayQuil and Alcohol: Drinking with Acetaminophen and Dextromethorphan 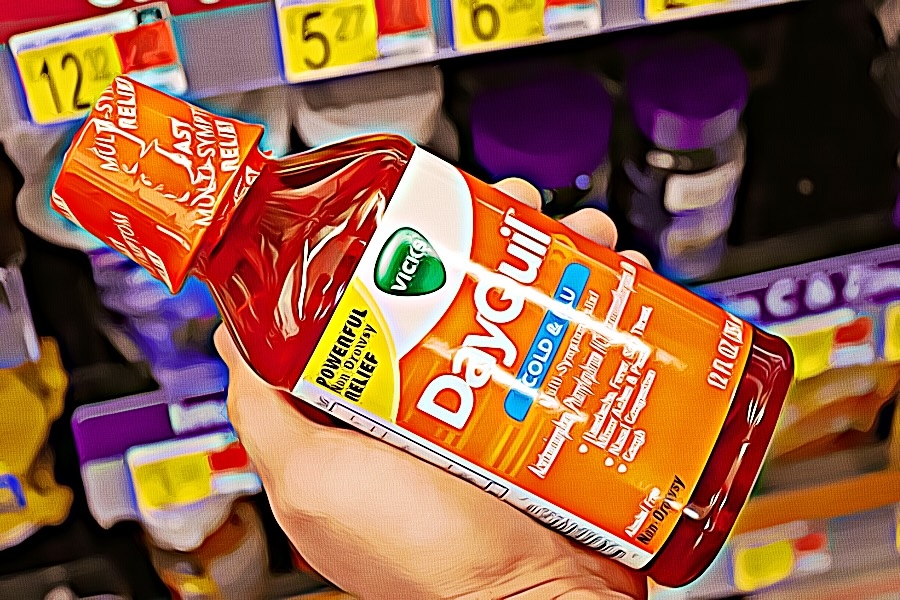 It’s not unusual for people to mix alcohol with over-the-counter drugs for colds or flu. However, some people feel that they can drink more if they take these medications. In reality, these drugs are intended to treat symptoms and are not designed to make you feel drunk or to cure a hangover.

Drinking alcohol while taking over-the-counter medications when you have a cold or the flu can leave you short of breath, dizzy, confused and unsteady on your feet. The fact is, medication and alcohol simply don’t mix, even if it’s something as seemingly common and harmless as Dayquil.

What Happens When You Mix Dayquil and Alcohol?

Mixing DayQuil and alcohol acts as a central nervous system depressant. In other words, your body has a lot more difficulty sending and receiving information to and from your brain. As a result, your coordination, balance, and judgment are lessened.

In some cases, this can result in slurred speech, slowed movement, and memory lapses. Not to mention, when you mix the two substances, the alcohol blocks the breakdown of Dextromethorphan and acetaminophen in the body. This causes the chemicals to build up in the bloodstream.

With that in mind, you could experience the following symptoms:

Coma and death may seem too severe of a side effect, however, alcohol poisoning is a very real possibility when you take Dayquil while drinking. Remember,  alcohol is a depressant, which means that it can slow the activity of your heart, which means your heart rate is much more relaxed.

In an overdose, there can be a dangerously low heart rate, which can lead to a person falling into a coma or even death. In addition, alcohol can cause difficulties with breathing, since it slows the muscle movements in your body.

Breathing problems can be especially dangerous if you have asthma or other respiratory conditions which require you to have quick, easy access to oxygen.

DayQuil is a non-prescription liquid medicine that is used to help with cold symptoms, such as sneezing, coughing, and fever. DayQuil also contains chemicals to decrease the symptoms of the common cold.

DayQuil is available in a liquid and a caplet form. When you take DayQuil, the first thing that you should notice is that you feel more comfortable. You might feel like you have more energy, your nasal passages will feel clearer and you may experience less coughing and congestion.

Acetaminophen also has fever-reducing properties which may help you feel better. DayQuil also contains Dextromethorphan, which is actually a cough suppressant. The drug works similarly to morphine and heroin but is not actually an opiate.

A common misconception is that Dextromethorphan is available in over-the-counter medications because it is not addictive. In reality, Dextromethorphan has a very small abuse potential, about the same as cough-syrups do for an average cough.

Is DayQuil Safe to Drink?

When taking DayQuil, it is important to take only the dose that is recommended. If you take more than the recommended dose, you could experience drowsiness, dizziness, confusion, and unsteadiness. Drinking alcohol with DayQuil can cause potentially dangerous side effects, including breathing problems, low blood pressure, and loss of consciousness.

In some cases, the risk of side effects is higher in those who are elderly, have underlying heart problems, or are taking certain other medications. People with a history of alcohol or drug abuse should also avoid mixing DayQuil and alcohol.

Alcohol and DayQuil: The Impact of Acetaminophen that Leads to Liver Damage

Acetaminophen is available in many different over-the-counter medications, including Tylenol, Excedrin, and DayQuil. Acetaminophen is used to treat pain, reduce fever, and relax muscles.

Because DayQuil contains acetaminophen, this can cause more damage to the liver than alcohol alone. While taking large amounts of DayQuil can damage the liver, the drug only contains an average of 325 milligrams of acetaminophen, which is well below the daily limit.

As a result, most people do not experience liver damage when taking the drug. However, when you mix alcohol with DayQuil, the combination can cause acetaminophen to build up in the body, which results in liver failure.

Acetaminophen and Your Liver: How Does Damage Occur?

The liver contains an enzyme named cytochrome P450 2E1 (CYP2E1), which helps the liver to break down the acetaminophen. When you mix alcohol with DayQuil and the drug acetaminophen, this creates oxidative stress on the liver.

Oxidative stress is when the liver is asked to do something that is beyond its ability. This is also why mixing alcohol with DayQuil can also prevent you from getting the drug’s intended purpose.

The oxidative stress on the liver prevents it from breaking down the acetaminophen and it remains in your body, causing you to have a headache and body aches.

What are the Symptoms of Acetaminophen Overdose?

The initial symptoms of an acetaminophen overdose include nausea, vomiting, loss of appetite, sweating, fever, and general weakness and fatigue. In some cases, your skin and the whites of your eyes can turn yellow.

As the liver continues to be damaged, you may then experience:

How About the Effects on Dextromethorphan (DMX) with Alcohol?

Dextromethorphan is an ingredient in DayQuil, which is used to suppress coughs. DMX is a cough suppressant that works in a similar way as morphine and heroin.

Dextromethorphan is not addictive, because it does not bind with the delta receptors in the brain. However, it is still possible to experience an overdose when taking the drug. In fact, death has been reported in people who have accidentally taken too much DMX.

What are the Symptoms of DXM Overdose?

The most common DXM overdose symptoms include:

What are the Symptoms of Liver Damage?

When acetaminophen builds up in your body, it can cause liver failure and liver damage. This problem can occur in those who have a history of alcohol abuse or taking more than the recommended dosage of DayQuil.

Liver damage is most often caused by the overuse of acetaminophen, which is why it is important to follow the directions that are given to you by a healthcare professional, such as a doctor.

Liver damage can lead to a buildup of fluid in the abdomen, which can be very painful, so watch out for the following symptoms:

If you do experience any of these signs, seek medical help immediately.

The Bottom Line: Abusing DayQuil and Alcohol are Red Flags that Indicate a Bigger Problem

When you mix alcohol and DayQuil, the drugs can have severe, potentially fatal side effects. In addition, mixing the drugs can also act as a catalyst for other underlying problems, such as drug and alcohol abuse, depression, or anxiety disorders.